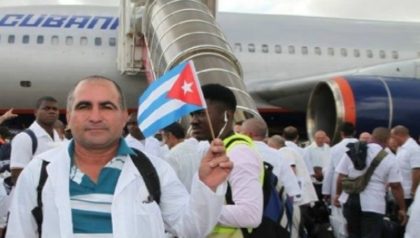 Algeria will receive more doctors from Cuba in return for suppling the communist run island with crude oil, which seeks to offset a steep decline in oil shipments from its key ally Venezuela.

An agreement was signed between the two countries providing for three years of Algerian oil supplies, the Cuban news agency Prensa Latina said.

An official from Sonatrach, Algeria’s oil and gas company, said that his country has exported 2.1 million barrels to Cuba last year and will supply the same quantity this year.

The Communist-run Island has relied almost exclusively on Latin American socialist partner Venezuela for crude supplies in recent years. However, the economic meltdown in Venezuela propelled a drop in subsidized oil imports in Cuba.

The drop in Venezuelan oil imports has weighed heavily on Cuba’s economy over the last few years, prompting it to ration fuel and electricity.

The first Cuban health mission arrived in the North African country in May 1963 with 56 Cuban doctors. Today, more than 1,000 Cuban medical practitioners work in health fields across Algeria as part of its ongoing health agreement.