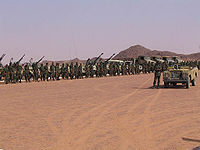 Algerian government mouthpiece, Algeria Press Service, and other pro-separatist websites have been inflating news regarding military exercises by the Polisario separatists, east of the berm in the region of Aouserd, as a sign of the militias’ readiness and capacity to wage war against Morocco.

Following the diplomatic setbacks it has received- whether at the UN, the African Union or the EU- Algeria and its puppet the Polisario are desperately looking for fictional victories in the Sahara front. When they fail to defend separatism globally, they resort to provocations locally.

Mauritanian media are speaking of Polisario military exercises aiming at penetrating Morocco’s security wall which kept the Sahara safe for decades and insulated it from the surge in terrorist activities that made Algeria’s desert and large swathes of the Sahel a no-go area.

Led by Brahim Ghali, war-monger wanted by the Spanish justice for war crimes, the Polisario militias are losing track. For many observers, the military games it has conducted on the Moroccan borders are but theatrical shows aiming at projecting power to the thousands of disenchanted Sahrawis who have been held against their will by Algeria and its agents, the Polisario, for decades banned from returning to their home-country.

The maneuvers are also serving a disinformation campaign led by Algerian official media to draw the international community’s attention to a separatist group, better described as relic of the cold war that purports to have an army made up of dilapidated soviet weapons donated by Algeria and Qaddafi’s Libya.

By staging military games east of the berm, the Polisario has in fact shown that it remains a puppet whose strings are pulled by Algeria. Such military presence east of the security wall is also a violation of the 1991 ceasefire agreement, which stipulates that the buffer strip should stay a demilitarized zone under the supervision of the UN mission in the Sahara, MINURSO.

Having recently received military equipment from the Algerian regime, the Polisario is becoming more than ever a tool used by Algiers to destabilize Morocco and sap all efforts seeking to find a lasting, political and mutually acceptable solution based on the Moroccan autonomy initiative.

What the Polisario and Algeria should know is that self-defense is guaranteed by the UN charter and any slight mistake by the Polisario on the security wall would trigger a commensurate response including the right to pursue the Polsiario elements within the Algerian territory in their Tindouf rear-base.