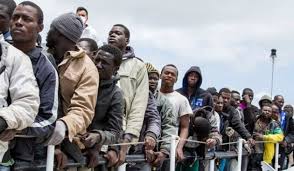 In yet a new violation of the UN Geneva Convention, Algerian authorities have proceeded to the indiscriminate extraditing of 10,000 sub-Saharans in need of international protection.

The figure was “proudly” announced by Algeria’s Interior Ministry Noureddine Bedoui in line with the wave of anti-migrant populism expressed by senior political figures in the country, venting the sluggish economic growth on poor Sub-Saharans, most of whom have fled poverty and conflict in their home countries to look for work in Algeria or seek transit to Europe via neighboring Libya.

Few days after the announcement of the migrant regularization campaign, a new Algerian political leader and former Prime Minister Ahmed Ouyahia (who was later on re-appointed Prime Minister) expressed statements verging on racism and hate speech against Sub-Saharan migrants in the country.

Speaking to Ennahar TV station, Ouyahya, Secretary General of RND political party, described Sub-Saharan migrants as a “source of crime, drugs and other calamities.” His racist statements showed fierce opposition to the government’s at-tempt to save its face by giving sub-Saharans an opportunity to obtain residency status in Algeria.

Last year, Algeria was rebuked by international NGOs for rounding up more than 1400 sub-Saharan migrants in Algiers who were later deported 1900 km southwards to the desert city of Tamanrasset, from which they were sent to Niger.

Several international watchdogs have lashed out at Algeria calling it to decriminalize immigration.

Amnesty International, Human Rights Watch and the UNHCR have all called repeatedly on Algeria to guarantee protection to migrants and asylum seekers on its soil and halt its dis-criminatory policies towards them in keeping with its com-mitments under the 1951 Geneva Convention.