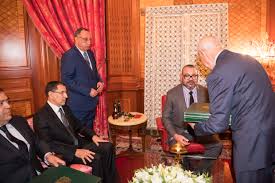 King Mohammed VI has approved sanctions against a Wali, six governors and over one hundred enforcement agents because of failure to fulfil their duties.

During an audience Monday at the Casablanca Royal Palace, the Minister of the Interior presented to the Monarch the results of investigations conducted by his department on the work and working methods of enforcement agents. The investigations on the ground revealed breaches in duty fulfilment on the part of a wali, six governors, six Secretary-Generals, 28 pashas and district chiefs, 122 caïds and 17 khlifas, all positions of different administrative scales at the Interior Ministry.

In application of the constitutional principle linking responsibility to accountability, the Minister of the Interior has submitted proposals to the King for disciplinary sanctions against those who fell short of their duties.

Besides the officials and agents suspended and who will appear before the competent disciplinary boards, 87 enforcement officers will receive warnings.
King Mohammed VI has repeatedly criticized the public administration for its inefficiency, poor performance and sluggish services.

The latest harshest criticism came in this year’s Throne Day speech, wherein the Monarch recalled the fundamentals of the Constitution and the urgency to implement them, stressing the rights and obligations of officials in their relations with citizens.

“The evolution witnessed in Morocco in the political domain and in the area of development has not led to the kind of positive reaction you would expect from political parties, leaders and government officials when dealing with the real aspirations and concerns of Moroccans,” he had deplored.

The Monarch who had launched in October 2016 a pressing call to reform the public administration, pressed that point again in the Throne Day Speech and listed the shortcomings of the civil service. He urged governors, caids, directors, staff members, local officials, etc. to work hard, and to “show a sense of responsibility that does credit to the civil service and yields concrete results since these officials are entrusted with serving citizens’ interests”.

King Mohammed VI who had insisted in his speech on responsibility, and answerability, stressed the need to apply rigorously the provisions of the second paragraph of Article 1 of the Constitution, which links public office with accountability.

“It is high time this principle were implemented in full. Just as the law applies equally to all citizens, it must be applied, first and foremost, to all officials, without distinction or discrimination, and in all of the Kingdom’s regions,” he said. “This is the dawn of a new era in which there is no difference between officials and citizens as far as civic rights and obligations are concerned; nor is there room for shirking responsibility or avoiding sanctions”.

And part of the implementation of this principle, King Mohammed VI fired last October four low performing ministers and other senior officials.

They were relieved of their duties for their proven responsibility in the delay witnessed in the implementation of a set of state-funded projects, part of the Al Hoceima Lighthouse of the Mediterranean development program.

The firing had come after the King received a scathing probe that he had commissioned in June. The report, presented by the head of the Court of Auditors has not featured misappropriations but did show serious cases of mismanagement of public funds.

The new sanctions announced Monday show that there is no backtracking on accountability in Morocco.