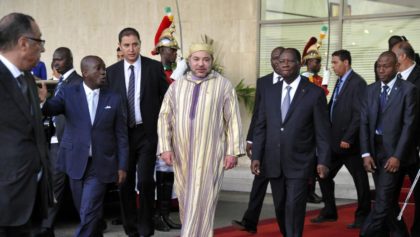 Morocco has adopted a pro-active diplomacy that breaks away with the empty chair policy, which left the country outside AU institutions since 1984. Almost one year after its triumphal return to the African Union, Morocco made diplomatic headways thanks to an African Policy that continues to turn former African adversaries into friends.

The talks held by King Mohammed VI with Angola’s President Joao Lourenço and South Africa’s Jacob Zuma, on the sidelines of the 5th AU-EU Summit in Abidjan (Nov 29-30), usher a volte-face in the stands of two staunch allies of Algeria and the Polisario in the continent.

The attendance of King Mohammed VI of the AU-EU Summit has demonstrated Morocco’s leadership and its weight in European-African relations and served as a showcase of the Kingdom’s growing economic and political clout as well as its increasingly effective soft-power.

While shortsighted commentators deem the Polisario’s participation in the event as a setback for Morocco, the presence of King Mohammed VI has pulled the rug from under their feat by making the Kingdom’s voice resounds in the summit during which the basis was laid for upgrading ties with South Africa and Angola, a heavy blow to Algeria and its puppet SADR.

In this regards, the talks between the King and the Angolan President Joao Lourenço are reflective of an undergoing rapprochement between the two countries following the exchange of high-level visits. As it sees the success of Morocco’s south-south cooperation with African partners, the new Angolan leadership seems intent on breaking away with the void ideological schisms in favor of a win-win partnership with Morocco.

Likewise, the meeting between the King and President Zuma of South Africa came as a surprise to the most optimistic observers. The Moroccan news agency wrote that the talks between the two leaders were “warm, candid and open,” and that they “agreed to work together for a promising future”.

This ice break meeting resulted in an agreement between the two leaders to upgrade their bilateral ties into high Ambassadorial level, in a move that augurs rapprochement between two of Africa’s biggest economies.

Morocco’s south-south cooperation model has earned it new friends and allies, including heavy weights such as Nigeria and Ethiopia.

The Nigerian refusal to back the Algerian advanced clauses against Morocco’s territorial integrity dealt a blow to the separatist theses proponents on the continent. In fact, Nigeria, together with Guinea, offered mediation leading to the amendment to anti-Moroccan clauses in the AU’s Human Rights Committee’s report last July.

Morocco’s return to the AU and its abandonment of the empty chair policy positions it to act as a bulwark within AU to resolutions favorable to separatist maneuvers. Since Morocco’s readmission to the pan-African organization, the appellation “occupied territories” was abandoned in favor of UN terminology. It is noteworthy to mention that UN Security Council resolutions on the Sahara have never labeled the Sahara as an “occupied territory”.

Over the last years, support for the Algerian-sponsored separatist thesis in the Moroccan Sahara has been waning, as 43 countries withdrew their recognition of the SADR entity out of 80 that previously recognized it in a Cold War context.