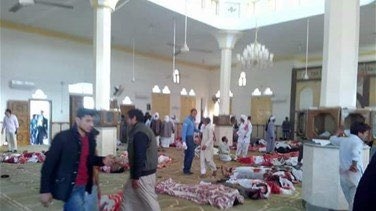 The terror attack perpetrated on a mosque in Egypt’s restive northern Sinai during the Friday prayers recorded the heaviest toll ever among civilians in the province.

At least 235 people were killed and another 109 injured in the attack on the Al Rawdah mosque, situated in the village of Al Rawdah between Bir Al-Abed and the city of Al-Arish,
Egyptian state-run Nile TV reported.

According to state-owned Ahram Online, at least two explosions were heard, before gunmen stationed outside the mosque started firing at worshipers who were trying to flee. They also fired at ambulances rushing the wounded to hospital, according to local media.

The attack has not been claimed yet but fingers are pointed at the groups affiliated to the Islamic state, as Egyptian security forces face almost daily attacks from ISIS-aligned militants, whom they have been battling in northern Sinai for several years, and especially after the bloody overthrow of elected President Mohammed Morsi in 2013. Mosques were relatively spared as the militant attacks have mostly targeted security and police forces.

Egyptian president, Abdel Fatah al-Sisi, who convened an emergency security meeting and declared three days of mourning, described the attack as “criminal” and “cowardly”, and pledged it “will not go unpunished”.