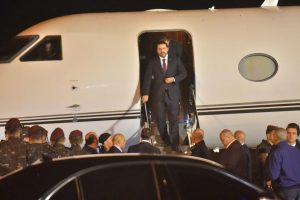 Lebanese Prime Minister Saad Hariri has accepted to put on hold his announced resignation pending new negotiations after President Michel Aoun asked him to do so.

“I presented today my resignation to President Aoun and he urged me to wait before offering it and to hold onto it for more dialogue about its reasons and political background, and I showed responsiveness,” Hariri said in a televised statement Wednesday.

The 47-year old Sunni leader arrived in Beirut late on Tuesday, ending two weeks in “exile” after resigning on November 4 in a broadcast from Saudi Arabia where he had been until Saturday.

Hariri in his resignation accused Iran and his cabinet member group Hezbollah for spreading strife. He also cited threats to his life.

President Aoun and Hezbollah accused Saudi Arabia of coercing the Lebanese leader into stepping down. They also believed Hariri had been put under house arrest.

Hariri arrived from Cyprus on his way from Egypt where he met with Egyptian President al-Sisi. On Saturday, he met in Paris President Emmanuel Macron.

Hariri attended Wednesday the Independence Day military parade as the country marks the 47th anniversary of its independence.

Before attending the parade, Hariri reportedly retreated to the grave of his late father, Rafiq Hariri.

He later addressed his supporters at his residence in downtown Beirut, saying “I am staying with you and will continue with you…to be a line of defense for Lebanon, Lebanon’s stability and Lebanon’s Arabism”.