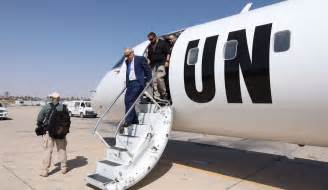 The UN Special mission in Libya (UNSMIL) has insisted that the UN forces who arrived in the Libyan capital will only be in charge of the UN building security, rejecting reports that the UN is sending ‘Blue Berets’ as peacekeepers in the North African country.

A spokesperson of the mission told media the forces that have been spotted in Libya were there for the security of the UN staff, Libya Herald reports.

Local media have claimed that there were up to 200 Blue Berets in Tripoli.

The spokesperson further noted that the UN forces would not engage ‘in any way or form’ with Libyans and that the UN has no intention to bring peacekeepers in Libya.

The mission head Ghassan Salamé early this month told German media that the UN building in Tripoli will be refurbished and that it will be guarded by UN security staff.

Libyans have been opposed to the presence of foreign forces including UN peacekeepers on the Libyan soil.

The UN is currently running a small office in Tripoli and Salamé said the office was too small for the UN staff.

The UN mission left Tripoli in 2014 and relocated in Tunisia as security was deteriorating due to power rivalries between Libyans factions.

Salamé himself made it clear that the UNSMIL mandate was purely for political purpose, and has no peacekeeping agenda.