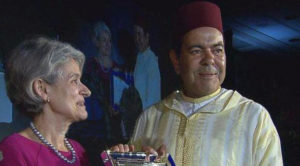 The sustained efforts made by King Mohammed VI worldwide for the promotion of tolerance, the consolidation of inter-cultural relations and coexistence have been recognized by the international foundation Global Hope Coalition, which granted the Sovereign a “Special Recognition Award”.

This prestigious prize has been handed over to the King’s brother Prince Moulay Rachid during a ceremony held Monday in New York on the fringes of the United Nations General Assembly.

Speaking on this occasion, UNESCO Director-General, Irina Bokova, who chaired the Global Hope Coalition Summit in NY, recalled the visit she made two months ago at the invitation of King Mohammed VI to the city of Fez and its old medina, included in the UNESCO world heritage list.

The moves made by the Moroccan Sovereign for the promotion of tolerance seek to counter “extremism and radical ideas by strengthening the values of mutual respect and openness”, added Irina Bokova, hailing the actions launched by the Monarch “for his country and for the world”.

The Global Hope Coalition is an initiative bringing together public leaders, private sector ‎and civil society advocates in the fight against intolerance and violent extremism.

The Coalition endeavors to identify, engage, mobilize, and foster the global network of Everyday Heroes fighting extremism and intolerance. It also aims to build bridges of entente and understanding throughout the world.

Besides the special gala dinner held on Monday evening, the coalition convened a Joint Action Meeting on Women, Children and the Trauma of Extremism.

The panel of renowned experts, led by Prof. Phyllis Magrab of Georgetown University, discussed the urgent need to protect and assist the most vulnerable victims of terrorism and violent extremism—women and children. They underscored the devastating long-term effects on emotional well-being, growth and development on those exposed directly or indirectly to the impact of violent extremism and terrorism.