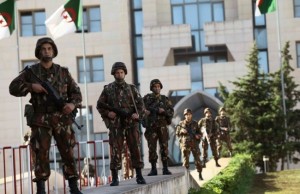 Algeria is bracing for tough times characterized by uncertainty at the security, economic and political levels. The country’s economy remains heavily dependent on hydrocarbon exports, which saw a sharp decline after the oil price plunge combined with an opaque regime whose living-dead president is leaving question marks over who really runs the country.

The return of residual terrorism under the banner of IS is also bringing back memories of the 1990s when the country was facing the same precarious economic and political conditions.

The alarm bell was rang by Algeria’s Interior Minister Noureddine Bedoui who warned that his country “is going through a serious period characterized by a range of security risks surrounding the country”.

The security issue has always been used to silence dissent and blackmail opponents. The government, which acts as a façade of the deep state, is using the argument that without the authoritarian status quo Algeria will crumble.

Bringing back memories of the black decades, the Interior Minister called on “all Algerians to be highly vigilant and cautious and to assist the different security services in their mission to maintain Algeria’s security and stability”.

Such statements were propagated in the government’s mouthpiece media, which invoke the looming IS threat after a suicide bomber detonated an explosive belt in an attack on a police station killing two policemen last week.

As Algeria’s security deteriorates, so does the social fabric. The state is no longer able to maintain lavish subsidies and braces for budget cuts and austerity measures that will see the country resorting to borrowing in two years at best.

Algerians who are used to state handouts under the form of subsidies will not let austerity measures be imposed without a fight. Venting frustration and anger at the failed economic policies that squandered Algeria’s oil money is expected. To thwart such dissent, the Algerian regime is systematically using its co-opted media to warn of looming real security risks to silence the opposition and keep the status quo.