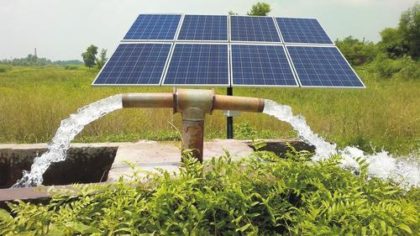 As part of efforts of bringing renewable’s share in overall electricity generation to 52% by 2030, Morocco has earmarked 2.3 billion dollars to boosting the use of solar energy in agricultural production.

This investment is meant to bolster the use of solar energy in water pumping and to curb the consumption of Butane gas, said Energy Minister, Aziz Rabbah, during the question time at the Lower House.

He said the solar water pumping will be generated on an agricultural area of 100,000 hectares in a first phase.

The Minister recalled that Morocco plans to bring the share of renewable energy in overall electricity production to 42% by 2020 and 52% by 2030.

The Moroccan Agency for Solar Energy (MASEN) recently increased its target to set up 4 gigawatts of renewable energy capacity by 2020 up to 10 gigawatts by 2030.

Phase one construction works started in August 2013 and Noor I was officially commissioned in February 2016. Noor II and Noor III are scheduled to start commercial operations in 2017 and 2018, respectively.

The project is being developed on a build, own, operate and transfer (BOOT) basis by ACWA Power Ouarzazate, a consortium of ACWA Power, the Moroccan Agency for Solar Energy (MASEN), Aries and TSK.

A consortium led by NOMAC, a subsidiary of ACWA Power, and MASEN will operate and maintain the solar complex.