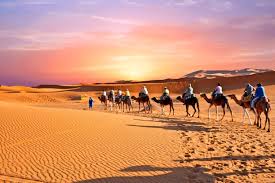 “The sector performed strongly across nearly all segments, with only cruise-ship arrivals slipping in the first quarter of 2017,” the OBG underscored in a report, noting that this generally positive performance comes at a time when security concerns and political instability continue to take their toll on several of other traditionally popular destinations in the MENA region.

The report cites Mohamed Sajid, the Moroccan tourism minister, who said the tourist sector is on course of expanding by a forecasted 5.5% in 2017, with overall visitor numbers reaching 10.9m. Revenue is expected to hit $6.5bn, up from $6.4bn in 2016, the OBG added.

The report also sheds light on Morocco’s incentives to attract Chinese tourists by relaxing entry requirements for visitors, recalling that Morocco took the step of exempting Chinese nationals from visa requirements at the beginning of June 2016.

The visa exemption initiative, announced during King Mohammed VI’s visit to China in 2016, resulted in a three-fold increase of arrivals from China compared to 2015.

“A stable and secure political environment, combined with incentives and infrastructural development, has helped Morocco to create an attractive investment climate, resulting in a raft of new hotel projects,” the report highlighted