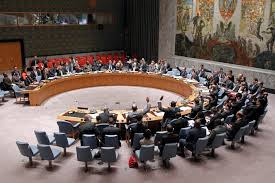 Egypt expressed concern over the countries, which do not respect the UN Security Council resolutions imposing sanctions on terror groups, singling out Qatar for what it called its pro-terrorism policy.

Egypt’s Deputy UN Ambassador Ihab Awad Moustafa went in a tirade against Qatar before the UN Security Council after the adoption of a resolution renewing sanctions on the Islamic State group and al-Qaeda.

The Egyptian diplomat’s remarks prompted a reaction from Qatar’s UN ambassador, Alya Ahmed Saif Al-Thani. She accused him of making “baseless accusations.” She said Egypt is not acting in the best interest of the UN because it is “exploiting” its non-permanent seat at the Security Council “to drag in issues that are not relevant to the council’s agenda”. Such irrelevant issues are just serving Egypt’s “own national agenda.”

The ongoing diplomatic rift has been described as a family affair that should be solved through dialogue spearheaded by regional states; most especially member states of the Gulf Cooperation Council.

Deputy Ambassador Moustafa insisted that the UN Security Council resolutions “must be effective” and “must stop any violation” because Qatar “believes that the economic interests and the different political orientations will protect them from any accountability vis-a-vis the Security Council if they violate its resolutions”.

Meanwhile reports that the quartet’s demands for the boycott and blockade be lifted on Qatar have been watered down from 13 to 6 has been rejected as false.

The reports surfaced this week after Saudi Arabia’s permanent envoy to the UN Abdallah Al-Mouallimi briefed a group of UN reporters about the six principles, which, he said, would be easy for Qatar to abide by after it rejected the first 13 demands, it deemed unrealistic.

Mouallimi said the six principles, come up during the July 5 meeting of the foreign ministers of the quartet, include Qatar’s commitment to combat extremism and terrorism, prevent financing and granting safe havens for such groups, and suspend all acts of provocations against its neighbors.