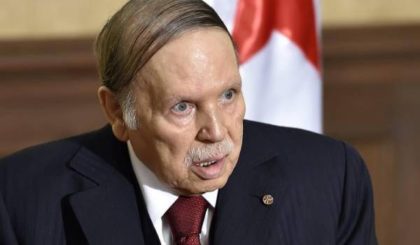 Algeria’s living-dead President Abdelaziz Bouteflika gave an address on the occasion of his country’s Independence Day asking citizens to prepare for tough times ahead as state coffers dwindle.

Bouteflika urged the Algerian people to prepare for the pinch of economic reality as the state will cut vital subsidies and increase taxes. The speech clearly revealed the fragility of the Algerian economy and its vulnerability to international oil and gas price volatility.

Algeria’s ailing President, who took power in 1999, failed to oversee genuine reform that could have achieved a diversification of the Algerian economy away from oil and gas, which represent 98% of total exports. 18 years after he took office, Algeria faces the same dilemma of the beginning of the 1990s when the country depleted its reserves and had to resort to foreign debt before plunging into a decade of devastating civil war.

Instead of blaming the current crisis on a lack of reform during the era of expensive oil, Bouteflika rather ascribes the crisis to external factors trigerring a “severe decrease” of revenues and necessitating “reforms” that should “be accepted by citizens”.

Algeria’s 2017 appropriation bill was calculated on an oil price of 50 dollars per barrel, while the IMF estimates that Algeria needs a barrel price of $110 to maintain macro-economic balance at a moment economic analysts warn of an upcoming budget crisis if oil prices remain at the current levels of around $50 per barrel.

In his speech, Bouteflika seems to be preparing the Algerian public opinion for a new wave of austerity measures as Algiers is no longer capable of maintaining the same public spending spree due to the growing budget deficit since oil prices fell from about 119 dollars a barrel in 2013 to a mere 50 to 40 dollars a barrel.

In all sectors of the public service (electricity, gas, water, rail transport, telecommunications), tariffs have been kept at levels lower than the cost of operations for more than a decade for social considerations. Now, the Algerian government can no longer maintain its generous handouts, threatening the erosion of a fragile social peace.

Trimming public spending and raising revenue through VAT and taxes on electricity, fuel and tobacco have so far provoked unrest, with rioters in the eastern city of Bejaia, clashing with police and torching of state buses at the start of January 2017.

The violence highlights the risks for Algerian authorities if they alter the subsidy system that serves as a means of buying social peace disguised as a so-called policy of even distribution of wealth, but aims in the end at perpetuating the absolutist regime, which is tightly controlled by the omnipresent and powerful army.

In the absence of economic reforms to breakaway with the rentier structure of the Algerian economy, the country is running out of time and money as it remains dependent almost entirely on earnings from oil revenues.

The Algerian government released its 2030 vision for economic development, dubbed “New Growth Model,” meant to attract investments to compensate for the collapse in oil prices.
However, the proposed reforms in the new economic growth model seem to ignore the widespread corruption that affected almost all large-scale projects in Algeria.

Flagship development project, such as the East-West Highway, fell victim to the national corruption malaise. Originally allocated a budget of $6bn, rampant graft saw the highway eventually completed for a price of almost $15 billion, making it mile for mile the most expensive road in the world.

To make matters worse, Algeria continues to squander significant resources on the so-called Bouteflika mosque. The $1.4 billion price tag on the mosque, with a capacity for 250,000 worshippers and the world’s tallest minaret, has diverted funds away from health care and social services.

Algeria’s social peace is on the verge of collapse. In the absence of reforms and the continuation of the authoritarian status-quo, Algeria is experiencing times of severe uncertainty where a mix of imploding demography, unemployed youth, languishing oil prices, regional turmoil and latent militant groups make the country a tinderbox waiting to explode.