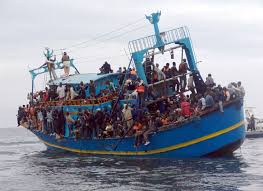 The Libyan navy has claimed that the country’s sovereignty is being jeopardized by international Non-Governmental Organizations (NGO) that are helping illegal migrants trying to reach Europe through Italy from the Libyan shores.

Spokesman Ayoub Qassim of the Libyan navy pointed out that “the humanitarian NGOs are blocking any agreements that help Libya uproot immigration issues; rather, they are helping the crisis escalate.”

Libya, Italy and the UNHCR have all affirmed that the influx of immigrants have increased over the past few months and the European country has threatened to send NGO rescue ships away from its ports. Italian Prime Minister Paolo Gentilioni has called for “the work to be shared” between European states before the country’s “exemplary” society that accommodated the migrants over the years becomes “unsustainable and stoking hostility.”

Qassim noted that “all the measures followed by the international community regarding immigration issues are faulty and are encouraging for more immigrants’ influx” as their numbers are “in a constant hike reaching a 20% higher rate” compared to the same period in 2016. He accused NGOs of having no regard to the sovereignty of Libya’s lands and waters, which are guaranteed by all international laws.

According to Italy’s Interior Ministry, 85,183 have crossed into Italy from Libya since the beginning of the year. Most of them are considered as economic migrants. Analysts expect the number of arrivals to increase as the peak season draws nearer; which is in summer when the waters are cooler.

A UNHCR commissioned report written by Altai Consulting and Impact Initiatives signaled that the smuggling industry has grown increasingly and that professional and transnational smuggling organizations further developed. The report highlighted that “armed groups play an increasingly dominant role” in what could be described as a profitable industrial venture wherein human lives are often lost.

Carmelo Zuccaro, the chief prosecutor of the Italian Sicilian port city of Catania where some of the ships carrying migrants have docked, also accused multi-nationality NGOs especially in Malta and Germany of having ties with Libyan human smugglers.