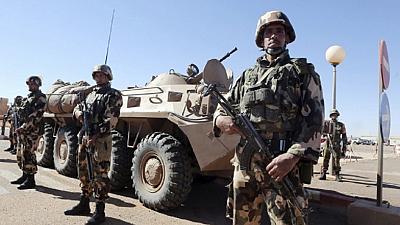 The army claimed Sunday it neutralized three ‘terrorists’ and arrested several others in ongoing counter-terrorism operation in the east region of the country.

The army operations in conjunction with other forces in Constantine and Skikda led to “the elimination of three terrorists, the capture of three others and eight people who were supporting criminal groups, and the surrender of another terrorist,” a defense ministry said in a statement wired by AFP.

Weapons, ammunition and money were seized in the operations, the statement further noted.

The armed forces have launched since June 11 an operation in the region to weed out terrorists.

The region of Constantine has become a flashpoint between security forces and Islamic State group (IS) fighters. In April, a man allegedly linked to IS blew himself up at El Haria, 35 km from Constantine, in a confrontation with security forces. Another terrorist aged 50 was arrested as he also was attempting to detonate his suicide belt.

Police also in February foiled an attempt by an IS militant to blow up a police station in the city of Constantine.

More than 40 terrorists have been killed since the beginning of the year according to army figures.