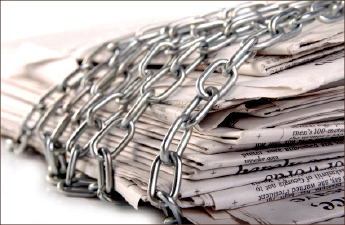 After abandoning Syrian refugees on the Moroccan borders in harsh conditions, Algeria proceeded to impose a ban on foreign journalists who have criticized this inhumane act at a moment it continues to lag behind, taking the 134th place in the freedom of the press index, issued by Reporters without Borders.

Moroccans come on top of a list of 150 journalists deemed “persona non grata” in the Algerian territory. The names were communicated to all Algerian consular services abroad to deny entrance of these journalists to Algeria by air, land and sea, local papers reported.

In addition to Moroccan reporters, the list includes famous Arab journalists from Egypt and other Arab countries who have openly criticized the Algerian regime and President Bouteflika.

The decision to deny access to foreign reporters comes as Algeria braces for May 4 elections amid an atmosphere of voter apathy and an impending budget crisis that threatens Algeria’s oil-funded social peace.

The restriction of access against foreign journalists critical of the Algerian regime was taken at a time Algeria sinks in the freedom of the press ranking established by Reporters without Borders. The freedom of the press in Algeria thus went from bad to worse losing 5 places to take the 134th place among the most authoritarian countries in the globe.

International rights NGOs have repeatedly denounced restrictions of the freedom of expression in Algeria. In its annual report 2016-17 on the state of human rights in the world, Amnesty International decried the prosecution in Algeria of peaceful critics, including human rights defenders, in unfair trials, and the forced closure of media outlets.

Last December 11, Mohamed Tamalt, a journalist and an outspoken critic of the Algerian regime, lost his life in Algeria after a hunger strike while in custody.

Mehdi Benaissa, the chief executive of Algeria’s KBC news, and Ryad Hartouf, the producer of the channel’s current-affairs program, were given Six-month prison sentences on fabricated charges after they broadcast a political satire that displeased the government.