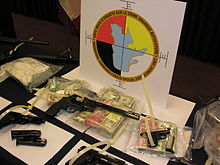 The Spanish interior ministry announced Sunday the arrest of 30 members of a drug trafficking gang in the south of the country, with the help of Morocco’s authorities.
The men, Spaniards and Moroccans, are member of “Las Castanas”; the largest drug trafficking and money laundering gang in Spain. The gang was operating in the Strait of Gibraltar; the land mass that connects the Atlantic Ocean to the Mediterranean Sea.
According to press reports, the police seized one ton of hashish and €350,000 in cash as well as several firearms, 16 vehicles and 3 boats. Bank accounts belonging to 24 people among the arrestees have been also frozen.
The operation was successful thanks to coordination with Moroccan authorities. Around 150 security forces were mobilized in the raid of 21 houses in Cádiz (Southern Spain) and in Morocco.
The gang used high power engine boats to ship cannabis resin from Morocco to Spain, the Spanish police said.

North Africa Post's news desk is composed of journalists and editors, who are constantly working to provide new and accurate stories to NAP readers.
NEWER POSTMorocco Wins Battle over Guerguarat without Firing a Single Bullet
OLDER POSTTunisia: One terrorist killed in gun battle with jihadists in Sidi Bouzid