A private Russian security firm said it sent agents to Eastern Libya to deliver arms to Khalifa Haftar confirming concerns in the West over a growing Russian influence in Libya, Reuters reported. 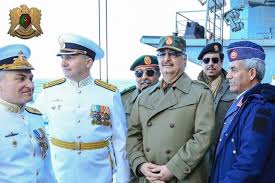 He said the security contractors travelled to eastern Libya last year and they were pulled out in February having completed their mission.

He said their task was to remove mines from an industrial facility near the eastern Libyan city of Benghazi, in an area that Haftar’s forces had liberated from Islamist rebels.

Although Russia backs diplomatically  Haftar against the internationally-recognized government, Russian officials denied providing Haftar with weapons in conformity with the UN arms embargo, which prohibits the import of weapons to Libya unless it is under the control of the UN-backed government.

Russia, which has vehemently opposed NATO intervention that overthrew the decades-long Libyan dictator Gaddafi, sees new opportunities in the power vacuum in Libya where it tacitly endorses the all-powerful Khalifa Haftar.

Several media reports have been speculating about a potential secret deal between Hafter and the Kremlin according to which Russia will arm Haftar’s forces in his endeavor to gain control of the whole country in return for a Russian military base in Libya.

Haftar paid two visits to Moscow in the past half year in a bid to secure arms supply despite the UN arms embargo in place since 2011 prohibiting the sale of weapons to Libyan factions, to the exception of the government in Tripoli, which can import weapons upon the approval of the UN Security Council.

However, despite the UN arms embargo on Libya, media reports say that Haftar has been steadily receiving arms through the land borders with Egypt and through the sea from allies, including Egypt and the UAE.

Libya has been split between two rival governments: the UN-backed Government of National Accord (GNA) and the Tobruk-based Government that supports Hafter.

The Tripoli-based GNA, set up under the Skhirate agreement in December 2015, has however failed to impose its authority over the whole country.