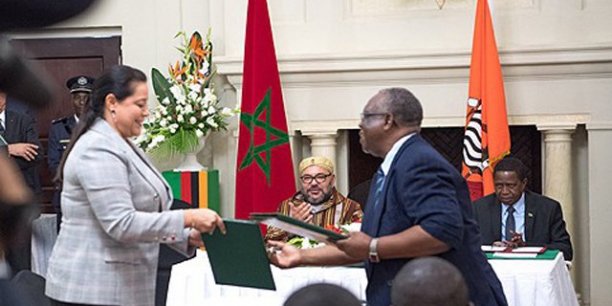 Morocco Shows the Way towards Economic Integration in Africa 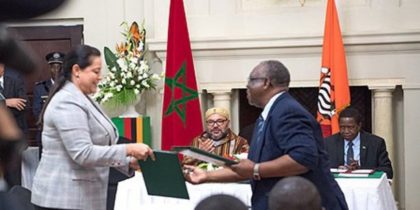 Morocco seems poised to build on its recent diplomatic and economic success in Africa in order to champion an African model of economic integration based on south-south cooperation, solidarity and win-win partnerships.

Led by the Monarch himself, Morocco’s African foreign policy has been given priority. Since his ascending to the throne, King Mohammed VI paid 46 visits to 25 African countries and chaired the signing of nearly a thousand bilateral and multilateral agreements.

Morocco’s engagement in favor of Africa’s development has been steady for years making the kingdom the second largest African investor in the continent.  This is evidenced by the willingness and dynamism of the Moroccan private sector in Africa where Moroccans banks, insurance companies, the Moroccan carrier and telecommunications company have been well established. At least two loans in the continent are processed by a Moroccan bank.

Morocco’s commitment towards Africa has also a humanitarian approach at home and aboard. The kingdom has joined words into action launching a second legalization campaign benefiting mainly sub-Saharan migrants in the country. The legalization campaign will help sub-Saharans lead a dignified life in Morocco by offering them access to basic services.

At the continent’s level, Morocco conducted several humanitarian operations, establishing field hospitals, carrying out projects to the benefit of the underprivileged, or sending emergency assistance to countries challenged by disasters, diseases or famine.

The actions led by the Kingdom in Africa are also meant to pool efforts and favor regional integration. As is the case with the large scale fertilizers factories to be built as part of a joint venture between Morocco’s phosphates company and local partners in Ethiopia and Nigeria. These factories will help achieve food security in two of the most populous African countries as well as their neighbors.

The gas-pipeline that will help channel Nigeria’s gas to the Mediterranean through West Africa is also a project that has a potential to foster regional cooperation through creating shared interests.

Morocco’s helping hand has extended to countries that were formerly ardent supporters of the Algerian-sponsored separatist thesis targeting the Kingdom’s territorial integrity. With countries such as Rwanda, Nigeria, Ethiopia and recently Ghana and Zambia, Morocco has made inroads in securing support for its territorial integrity through credible diplomatic efforts.

Zambia, one of the countries that used to show support for the Algerian-funded separatists, is on course to strengthening ties with Morocco following the current visit by King Mohammed VI to the southern African country.

The King’s visit to Zambia, as part of a new African tour, enabled the opening of a new era in bilateral ties marked by the signing of 19 agreements covering political consultation and cooperation in the fields of education, industry, agriculture, airlines, renewable energies, water management, tourism, finance, banking, insurance and scientific research.

The signing of these agreements came after a successful Moroccan-Zambian business forum during which the business community in the two countries discussed opportunities for future cooperation.

Prior to the signing ceremony of the 19 agreements, King Mohammed VI held talks with Zambia’s President Edgar Chagwa Lungu who welcomed Morocco’s triumphal return to its African Institutional family.

“We missed Morocco for long and we are happy for its new comeback within its African family,” said Zambia’s president in a statement to the press.

And African leaders are right to be happy because Morocco’s return to its African family is a good omen for all Africans as it renews Morocco’s commitment to serve African citizens, to share and transfer its know-how, and to build a safe, solidarity-based future.

“We enthusiastically invite African nations to join our country’s dynamism and to give new impetus to the whole of our continent…It is time for Africa to benefit from Africa’s wealth,” King Mohammed VI had said in the landmark speech he delivered before his African peers after the African Union enacted Morocco’s return to the continental organization.

North Africa Post's news desk is composed of journalists and editors, who are constantly working to provide new and accurate stories to NAP readers.
NEWER POSTAmnesty International Slams Restrictions of Freedoms in Algeria
OLDER POSTMerkel Calls off Visit to Algeria Due to Bouteflika’s Failing Health