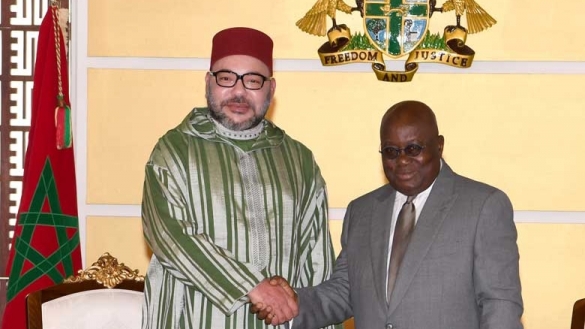 Accra Congratulates Rabat for its Comeback to African Union 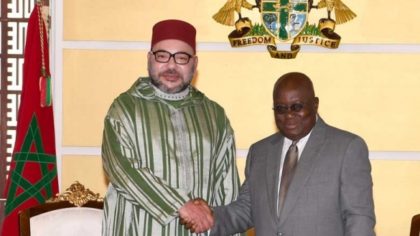 President of Ghana Nana Addo Dankwa Akufo-Addo has congratulated King Mohammed VI for Morocco’s return to its African institutional family, saying Rabat’s comeback will give a new momentum to the African Union (AU).

A joint statement issued following the official visit paid by the Moroccan Sovereign to this West African country Feb. 16-18 says the two leaders discussed the Sahara issue and agreed that the efforts made by the UN to reach a just, lasting and mutually agreed peaceful resolution should be given the needed support.

They condemned terrorism and violent extremism in all its forms and reaffirmed their support for regional and international efforts to combat this growing threat.

The two African leaders pledged to join efforts to rev up CEN-SAD so that this regional organization will be able to fulfill its mission in the fields of peace, security, stability and development of its member states, particularly in the Sahel region.

President Akufo-Addo voiced his country’s keen interest in the creation of the North-West African forum, which seeks to enhance coordination between member states in the political, economic and social fields, stresses the joint statement, underlining in this regard the importance of the gas pipeline project to be built from Nigeria up to Morocco.

The landmark project, which will be beneficial to all the countries of the region, is a “symbol of the South-South cooperation that African countries should promote in order to ensure Africa’s model of development as King Mohammed VI has consistently called for”, says the Ghanaian president.

He also hailed Morocco’s migration policy and commended the North African Kingdom’s contributions for the development and stability of the West African region, calling for the consolidation of relations between Rabat and ECOWAS.

Regarding bilateral relations, president Akufo-Addo praised Morocco’s constitutional reforms and congratulated the Sovereign for his exemplary leadership which has gained wide recognition in Africa and around the world.

For his part, King Mohammed VI paid tribute to Ghana for its investment policy which turned the country into a major gateway for foreign direct investment in the continent.

Both Heads of State underlined the need to build a strong economic partnership combining public and private sectors to serve as a model of South-South cooperation in the continent.

The royal visit to Ghana, part of a new African tour, was crowned with the signing of 25 cooperation agreements in agriculture, industry, finance and the avoidance of double taxation.

This visit has enabled Morocco to score another point against its enemies as it gained the support of another country which until recently was deceived by the Polisario separatists, armed and funded by Algeria.

But, apparently, the more support Morocco wins in Africa, the more loss its foes incur in the continent. As Rabat goes up, its enemies go down.