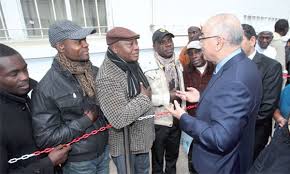 Morocco announced Monday that it was immediately embarking on the second phase of the regularization process of undocumented migrants, in line with the Moroccan exemplary migrants’ integration policy spearheaded by King Mohammed VI.

Given the success of the first phase of the regularization campaign that took place in 2014, the King recommended the launch of the second phase of the process at the end of the current year, as it was already planned, the National Commission in charge of Illegal Immigrants’ Regularization said in a statement on Monday.

During the King’s numerous trips to Sub-Saharan countries, all the heads of State he confers with commend Morocco’s migration policy, which aims at promoting the economic and social integration of undocumented migrants mainly those from Sub-Saharan Africa, the statement said.

The move is yet another proof of the Kingdom’s Africa-oriented strategy which is imbued by solidarity and which places the dignity of the African citizen above any other consideration.

As put by King Mohammed VI in a speech he delivered last August, “Morocco was one of the first countries of the South to adopt a genuine solidarity-based policy regarding sub-Saharan migrants…This integrated policy, which is rooted in humanitarian values, is designed to make sure migrants’ rights and dignity are safeguarded.”

In 2014, Morocco adopted a set of measures in favor of the aliens and launched a large-scale regularization operation that enabled some 25,000 migrants to get residence and work permits.

These migrants, mostly from Sub-Saharan Africa but also from Syria and other war-torn countries came to Morocco in the hope to reach Europe, but ended up staying in the North African Kingdom.

“As part of the implementation of this policy, my country has, without any arrogance, pomposity or discrimination, regularized the situation of migrants using fair and reasonable standards. It has provided the conditions needed for migrants to reside, work and lead a dignified life within our community,” King Mohammed VI had pointed out in his August speech.

The King who had commended the immigrants settled in Morocco for being hardworking people, for their good behavior, their commitment to the rule of law and their respect for Moroccan values, pointed out that “Morocco, which has long rejected the methods adopted by some to address migration issues and which have turned out to be a failure, is proud of what it is doing in terms of receiving and integrating migrants.” Morocco will keep up this practical, humanitarian approach, the King had vowed. And this second phase of the regularization process of undocumented migrants evidences, if need be, that the King’s remarks were not empty promises.