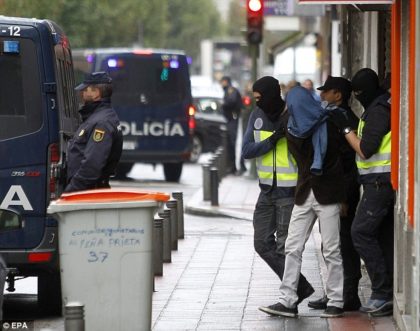 The joint operation underlines the close cooperation between the two counties in anti-terror struggle.

Two of the suspects were arrested in Spain by the country’s security forces, the interior ministry announced. The first suspect; a Spaniard of Moroccan origin, was arrested in the city of Gijon.

The second, a Moroccan citizen, was arrested at San Sebastian (Basque country). The two ISIS militants were very active in propaganda activities on social media, the interior ministry said in a statement.

The suspects indulged in promoting the group’s “military victories, social media progress and other deeds.” Besides the promotion of the victories, the two men also promoted the group’s videos acclaiming violent acts, reports further say.

The militant arrested in Gijon established a secured computer network that enabled him to evade police surveillance, the statement stressed. He used virtual telephones, some tools used by IS members to remain anonymous.

The individual arrested in the Basque country has been active in the recruitment of would-be jihadists. He actually recruited new members for the group because he was in contact with uneducated and underprivileged youths who are easy prey for the terrorist group.

The two men nabbed in Morocco were active in the Northern cities of Tetouan and Fnideq, said the Moroccan Interior Ministry in a statement.

They are accused of recruiting new fighters for the terrorist group. According to the Moroccan interior ministry, the two militants had close contact with IS fighters operating in Syria and Iraq.

This joint operation, which demonstrates the excellence of security cooperation between Morocco and Spain, is ongoing with the search for other suspects on both sides of the Mediterranean, the Spanish interior Ministry said.