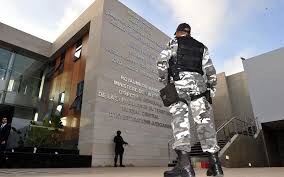 Moroccan security services have captured last weekend two terrorists tasked with funding and coordinating with jihadists of the Libyan branch of the terror organization ISIS.

The two operatives were arrested in Morocco’s economic city of Casablanca and its suburban region of Had Soualem within the frame of the ongoing investigations on Libyan affiliates of ISIS.

The 10-member terror cell, which was broken up lately, was operating in Marrakech, Essmara, Sidi Bennour and Had Soualem, and was planning to carry out attacks targeting Moroccan security services and other strategic sites.

According to Morocco’s Central Bureau of Judicial Investigation (BCIJ) chief Abdelhak Khiame, the ISIS cell had smuggled in weapons from nearby Libya and was planning chemical attacks on four cities plus a suicide bomber strike.

He also said that the security services of the North African country have foiled 25 terror plots in the past year alone – including one in February involving mustard gas.

According to press reports, US Special Forces had captured last month ISIS chemical weapons chief who admitted the group was planning to use mustard gas in future attacks.

During the latest international Nuclear Security Summit held in Washington DC, US President Barack Obama has warned that the prospect of ISIS or other terrorists getting hold of a nuclear bomb is among the most serious threats faced by the world.

He said it was clear that “these mad men” would use such a device to kill as many people as they could.