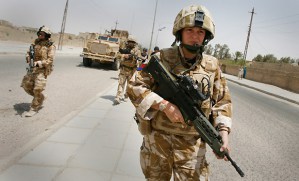 UK defense minister Michael Fallon has said that his country would send 20 soldiers to Tunisia to stop Islamic State fighters from entering the North African country from neighboring war-torn Libya, which has plunged into chaos following the fall of Colonel Gadafi.

“A training team of some 20 troops from the 4th Infantry Brigade is now moving to Tunisia to help to counter illegal cross-border movement from Libya in support of the Tunisian authorities,” Fallon told Parliament on Monday.

“I am extremely concerned about the proliferation of Daesh along the Libyan coastline, which is why we have been urgently assisting the formation of a new Libyan government,” added the defense minister.

The British military advisors will provide mobile patrolling and surveillance training in Tunisia. They will teach local military personnel how to spot barbaric militants and how to prevent them coming across the border and destabilizing the region.

The move comes after growing concern that ISIS is seeking to use Libya as a base to plan and carry out attacks. Last June, 30 British holidaymakers were killed when an Islamist gunman trained in Libya attacked a beach at a hotel on Tunisia’s Mediterranean coast.

Tunisia has extended lately the state of emergency once again by another month to March 22 as the North African country faces growing terrorist threats and popular anger over deteriorating economic and social situation.

The North African country, which has been targeted by the Islamic State group, is believed to be the biggest exporter of jihadists, with the authorities saying at least 3,000 Tunisian nationals are fighting in Iraq and Syria.

Travel operator Thomas Cook has cancelled all British bookings to Tunisia until 31st of October as security fears grow following a wave of violent protests across the North African country.